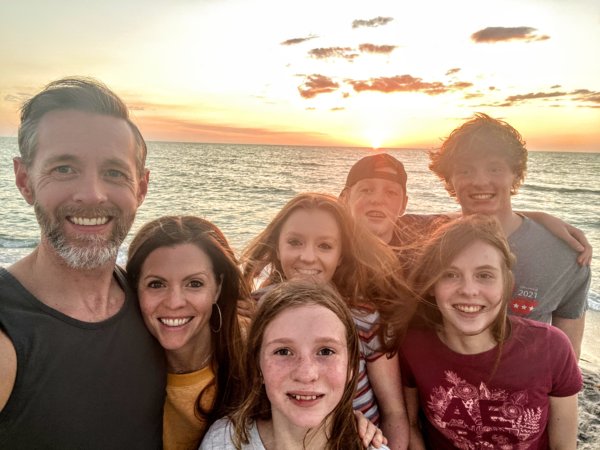 I’m a happily married dad of 5. I’ve been working full-time in internet marketing since 2007. My team and I manage e-commerce advertising for high-value brands.

I started my career out of college as an accountant at Deloitte, the second-largest accounting firm in the world. I can’t even tell you exactly why I decided to major in accounting except that my dad is an accountant (so it was familiar to me) and I knew I would always be able to understand business numbers if I learned accounting.

But things don’t always go as planned…I still remember my first day at Deloitte in Phoenix, AZ because I promised myself that day that I would never work in a cubicle again. Not that doing so makes you less of a person, but my dream was to chart my own course with my own business. Sitting in a cubicle doing tax returns was the exact opposite of that dream.

So after two years at Deloitte, I resigned. In hindsight, I recognize it was truly a dumb decision at that particular time lol. I had a solid job with fantastic co-workers and I turned away from it to face a lot of uncertainty. My sweet wife was very concerned but she was so good to support me emotionally through several lean years. I spent the next two years working contract jobs while I tried getting other businesses off the ground.

And then one day, it all changed…

There was a business magazine I subscribed to that I think was called Business 2.0 (I honestly can’t remember). Anyway, one day there was this article about some guy living in Cypress (the country) who made money using online ads to drive leads for businesses. The idea totally enthralled me. And let’s face it, the picture of him lounging pool side while the Internet made him money didn’t hurt either.

So in that moment, literally, I became an internet marketer.

As crazy as it sounds, I left the job I had as a director of marketing for a moving company and set out to do something I had ZERO experience doing. Keep in mind I had 3 kids and a pregnant wife at the time and I was the sole breadwinner!

It was another truly dumb decision that I cringe as I look back at. But I wouldn’t change that decision even if I could go back. I do not recommend you follow that same path, however! I subscribe pretty heavily to the sink or swim mentality and thankfully, it has worked out for me. I decided if I put everything on the line, I would find a way to succeed.

Plus, as a licensed CPA (I have since surrendered my license since I no longer practice), I had my “ace in the hole” knowing that I could find a job in accounting if I really needed one. So in that sense, it wasn’t as risky as it might have been for others.

Still, there were some lean days in the beginning that really tested my resolve to stick with it.

But now…more than 15 years later, I’m still doing internet marketing. If you’re interested in hiring me and my team to setup and manage profitable e-commerce ads for your business, set up an intro call today.

Take the next step

We’ll take your Facebook, Google, Bing, and Amazon ads to a 6-12X ROAS.

We use cookies on our website to give you the most relevant experience by remembering your preferences and repeat visits. By clicking “Accept”, you consent to the use of ALL the cookies.
Do not sell my personal information.
Cookie SettingsAccept
Manage consent

This website uses cookies to improve your experience while you navigate through the website. Out of these, the cookies that are categorized as necessary are stored on your browser as they are essential for the working of basic functionalities of the website. We also use third-party cookies that help us analyze and understand how you use this website. These cookies will be stored in your browser only with your consent. You also have the option to opt-out of these cookies. But opting out of some of these cookies may affect your browsing experience.
Necessary Always Enabled
Necessary cookies are absolutely essential for the website to function properly. These cookies ensure basic functionalities and security features of the website, anonymously.
Functional
Functional cookies help to perform certain functionalities like sharing the content of the website on social media platforms, collect feedbacks, and other third-party features.
Performance
Performance cookies are used to understand and analyze the key performance indexes of the website which helps in delivering a better user experience for the visitors.
Analytics
Analytical cookies are used to understand how visitors interact with the website. These cookies help provide information on metrics the number of visitors, bounce rate, traffic source, etc.
Advertisement
Advertisement cookies are used to provide visitors with relevant ads and marketing campaigns. These cookies track visitors across websites and collect information to provide customized ads.
Others
Other uncategorized cookies are those that are being analyzed and have not been classified into a category as yet.
SAVE & ACCEPT